Since opening its doors in Sept. 2020, Movement Brewing Co. has established itself as a family- and pet-friendly brewery that hosts a variety of events including trivia nights, live music, corn hole and even wrestling.

The idea for Movement Brewing Co.’s name rose from the flames of a firepit. One evening, owners Alanna Cavanagh, Nick Cavanagh, Sarah Shipley and Chris Shipley were discussing the idea of opening a craft brewery, something they’d been brainstorming for years.

“We’d been talking about it for so long, and we actually had different names for our hypothetical brewery while we were drinking about it,” said Alanna Cavanagh.

As the libations flowed, the conversation turned to the burgeoning craft brewery scene in the Greater Sacramento region. The Cavanaghs and Shipleys wanted to create a brewery that honored traditional beer styles while also pushing the innovation envelope. They wanted to create a movement.

Though it would be a few more years until the brewery’s opening, it was in that moment that Movement Brewing Co. was born.

Since opening its doors at 11151 Trade Center Drive in Sept. 2020, Movement Brewing Co. has established itself as a family- and pet-friendly brewery that hosts a variety of events including trivia nights, live music, corn hole and even wrestling.

“We throw a lot of fun parties,” said Alanna. “It’s us in a nutshell to say we like to do anything, like we’re game for whatever. We enjoy kind of thinking outside of the box.”

Step inside the Movement Brewing Co. taproom and you’ll find a wide-open space perfect for lounging and libations. Pinball machines stand at the ready in the roughly 7,200 square foot industrial space and intricate murals adorn the walls.

In one mural, which features notable designs from some of Movement’s flagship beers, a dandy gentleman (Uncle Money Pilsner) raises a glass in cheers, his figure surrounded by barrels, a bee (Hazycomb IPA) and a night owl (Ancient Night Owl Stout). The other mural is an amalgamation of California beer culture, featuring the California grizzly bear, the state Capitol, hops and more. In essence, it’s a visual representation of the movement that inspired Movement Brewing Co’s name.

“Matt Cavanagh, Nick’s brother, is a really great artist,” said Alanna, noting that Matt owns a business called California Artworks. “He did all the designs and hand painted them, not to mention every single label that we come up with and our company logo.”

Movement Brewing Co. is a family affair. Alanna’s father works as the brewery’s accountant and Tommy Hamilton, who is married to Nick Cavanagh’s sister, is Movement’s head brewer.

“He is such a talent,” said Alanna, noting the myriad styles of beer Hamilton can brew. “We kind of like to be known for having a wide variety of choices when you come to our brewery because we have a lot of different tastes. Where I like my lagers and blondes; Chris, Nick and even Sarah like the IPAs and the sours.”

Currently, Movement Brewing Co. has about 18 brews on tap. Eight to 10 of those brews are usually available for purchase in either cans or bottles.

“Our flagship beers are really going to be the Uncle Money Pilsner and the Dude Monster Hazy IPA,” said Alanna. “Those two we try to have on as often as possible. But what I think is really cool are some of our west coast IPAs (Dank R Us and Rivalry), which have been selling really well, and we also make really fun, fruited sours.”

“And if you’re not a big beer fan or you’re gluten free, we make seltzers,” she added. “And what’s really cool about our seltzers is that they’re made with real fruit. It’s not just an essence.”

When you go to Movement Brewing Co., you’re exploring the tip of the iceberg that is the Rancho Cordova Barrel District, a collection of six breweries, two distilleries and a meadery.

“The city is really smart to have done this and really promote it and help businesses like ours because they’re creating this pocket for craft beverages in the Greater Sacramento region,” said Alanna. “It’s awesome that they’ve put thought and time into making this become a thing.”

“You feel supported in the city.” 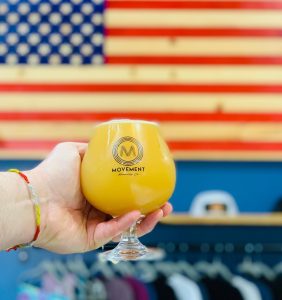 About the Author: Greg Watry